IAHPC Research Advisor Dr. Tania Pastrana selects one article from recently published medical literature and describes why it is worthwhile. 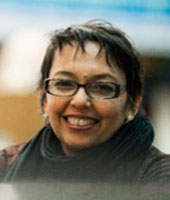 Malignant bowel obstruction (MBO) is a challenging and common problem, especially in patients with advanced gastrointestinal or gynecological cancer. Its symptoms greatly affect quality of life1, and the optimal approach is seldom clear. Until now, recommendations were based mostly on expert opinion. The Palliative Care Study Group of the Multinational Association of Supportive Care in Cancer (MASCC) recently published an update on the state of the art of medical management of malignant bowel obstruction.

The team, led by Dr. Mellar Davis, conducted a systematic review of literature published since 2015. One systematic review and three randomized trials were found. Octreotide was recommended as a frontline treatment for inoperable MBO due to the reduction of gastrointestinal secretions and colic, thereby reducing nausea and vomiting. However, I wonder if it is an available and affordable medication in low- and middle-income countries.

Scopolamine butylbromide was inferior for reducing secretions, but useful for the management of breakthrough nausea and vomiting, or colic in patients taking octeotride—much more than glycopyrrolate and hyoscine butylbromide. Olanzapine or metoclopramide were effective in reducing nausea and vomiting secondary to MBO, but metoclopramide should be avoided if colic or abdominal pain is present. Haloperidol has not been compared with other antiemetics, but there is wide consensus about its use. No studies were found that assessed ondansetron, cyclizine, prochlorperazine, promethazine, chlorpromazine, or cannabis, none of which were recommended as first- or second-line antiemetics for MBO by the expert panel.

Background: Malignant bowel obstruction (MBO) is a frequent complication in patients with advanced cancer, particularly colon or gynecological malignancies. MASCC previously published a guideline for symptom management of MBO in 2017. This is a 5-year update.

Method: A systematic search and review of relevant literature includes a review published in 2010 and 2017. The guideline update used the same literature search process as followed in 2015. The dates of the new search included 2015 up to February 2, 2021. The guidelines involved the pharmacologic management of nausea and vomiting in malignant bowel obstruction (MBO) only. Only randomized trials were included in the updated guideline as evidence. The evidence was reviewed by the panel and the MASCC criteria for establishing a guideline were followed using MASCC level of grading and category of evidence.

Results: There was one systematic review and 3 randomized trials accepted as evidence from 257 abstracts. Octreotide is effective in reducing gastrointestinal secretions and colic and thereby reduces nausea and vomiting caused by MBO. Scopolamine butylbromide is inferior to octreotide in the doses used in the comparison study. Olanzapine or metoclopramide may be effective in reducing nausea and vomiting secondary to partial bowel obstructions. The panel suggests using either drug. Additional studies are needed to clarify benefits. Haloperidol has been used by convention as an antiemetic but has not been subjected to a randomized comparison. Ranitidine plus dexamethasone may be effective in reducing nausea and vomiting from MBO but cannot be recommended until there is a comparison with octreotide.

Discussion: Octreotide remains the drug of choice in managing MBO. Ranitidine was used in one randomized trial in all participants and so its effectiveness as a single drug is not known until there is a randomized comparison with octreotide. Antiemetics such as metoclopramide and olanzapine may be effective, but we have very few randomized trials of antiemetics in MBO.

Do you have any questions regarding Under My Microscope?

The articles below, selected from recent issues of Barry R. Ashpole’s weekly report Media Watch, focus on the critical role of nurses in the provision and delivery of quality end-of-life care.

Development and Protocol for a Nurse-Led Telephonic Palliative Care Program

Nursing Outlook | Online – 20 January 2021 – The authors describe the design and implementation of a novel nurse-led palliative care (PC) program. Their data demonstrates that seriously ill patients are willing to engage in nurse-led telephonic PC programs and that engagement rates in their program do not differ from other telephonic interventions The early analysis also demonstrated that nearly two-thirds of patients who died in the authors’ program were enrolled in hospice services, which suggests that nurses are able to facilitate goals-of-care discussions between patients and caregivers and to assist with referrals to hospice services telephonically. DOI: 10.1016/j.outlook.2020.12.011

Australian Critical Care | Online – 10 August 2021 – [T]he provision of end-of-life care (EoLC) is a core feature of critical care nursing, yet not all nurses feel adequately prepared for their role in the provision of EoLC. For this reason, the Australian College of Critical Care Nurses has endorsed 28 end-of-life care practice recommendations aimed at ensuring optimal end-of-life care in critical care, in accordance with local unit practice and resources, staffing, and patient profiles. The foci are: family-centred care (6 recommendations); communication and decision-making (3); patient comfort and family support (8); possible organ donation (2); care after death (4); and self-care (5). DOI: 10.1016/j.aucc.2021.06.006

Also in Australia: Remote area nurses’ perceptions of the enablers and barriers for delivering end-of-life care in remote Australia to Aboriginal people who choose to pass away on their traditional lands

Journal of Cancer Education | Online – 15 June 2021 – The Oman Cancer Association in the Sultanate of Oman, in collaboration with the Middle Eastern Cancer Consortium and the Oncology Nursing Society, led a palliative care (PC) initiative over the past decade to better integrate PC into the healthcare system. Components of this initiative include integrating PC into the healthcare curricula and providing PC education to over 400 nurses and other healthcare professionals within Oman. The four-part education series includes the following courses: 1) Foundations of PC; 2) Advanced concepts in PC; 3) PC leadership; and, 4) PC Research.

Editor’s note: The August 16 issue of Media Watch referred to the Humane Prison Hospice Project, which may be of interest to readers.

Media Watch monitors the literature and the lay press on issues specific to the quality of end-of-life care. It is international in scope and distribution. View current and back issues here.