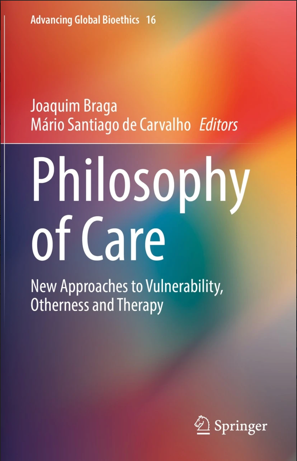 Philosophy of Care: New Approaches to Vulnerability, Otherness and Therapy

For clinicians in palliative care who are drawn to reflection on the deeply philosophical dimensions of the type of work we do, this volume is a wonderfully useful contribution. It seeks to unpack what it truly means to “care” for others, and translate this meaning not only to our own practice, but to the world we inhabit.

This volume is divided into five parts, each of which articulates a different dimension in the philosophy of care: vulnerability, economy, otherness, the self, and therapy.

Part 1 situates the philosophy of care within our ubiquitous state of interdependence and vulnerability. Using different theoretical approaches, the authors highlight the great strengths and shared relational nature of vulnerability, linking us with each other and those we care for to promote understanding, meaning, and solidarity. For readers with an interest in theoretical philosophy, seeking to reflect deeply on the epistemic and existential nature of the work we do, this section provides excellent fodder for exploration and inspiration. The authors link our instinctual awareness of vulnerability as a fundamental part of our work in palliative care, to some of the deep constructional work of established philosophical paradigms, creating a careful and deliberative scaffold for deepening our understanding of care, and how it intersects with meaning and value in ourselves and “the other.”

Parts 2 to 5 expand on these ideas and apply them to core components of how we and our work engage with the world around us. The chapters span a breadth of domains: economic and political terrain, climate change, global justice, refugees, sociocultural notions of “otherness,” and reinterpreted formulations of individuation and subjectivity. Finally, the volume reorientates us back to practice, and what it means to “look after people” as professionals dedicated to providing “therapy” through the lens of care.

As a palliative care physician, with dual expertise and interest in clinical ethics and bioethics, I found this book a breath of fresh air—particularly in the work it does in translation between academic and theoretical philosophy, and my clinical work in palliative medicine. Editors Joaquim Braga and Mário Santiago de Carvalho have brought together a diverse and insightful group of thinkers and writers, and curated an excellent contribution to the theoretical discourse on care as it relates to our work and our world.

Linda Sheahan is a palliative care physician; heads the clinical ethics service at South Eastern Sydney Local Health District; and is a conjoint lecturer with the School of Clinical Medicine, Department of Medicine & Health, University of New South Wales in Sydney, Australia.

A Memoir on the Death of One Woman’s Aging Mother 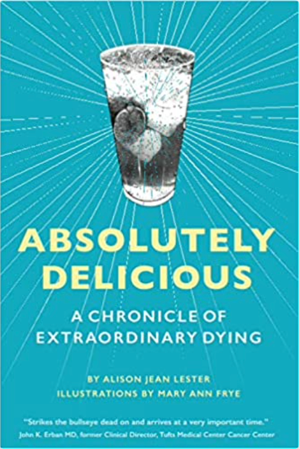 The starting point of is one of the things I also absolutely enjoyed: Alison Lester’s mother Valerie, experienced a so-called “good death.” While this is still the story of a daughter who is sad to lose her mother, the main takeaway is: look at this wonderful life, which ended in a wonderful death.

Her mother’s sense of humor shines through: Valerie named her three brain tumours Mel, An, and Oma. A biographer who raised a family and, later, cared for husband, Valerie made choices about divesting her belongings and the things she wanted to do before she died. One final wish was to enjoy a refreshing gin and tonic: her response to this final drink is the book’s title.

This memoir will speak particularly to those faced with the reality of ageing (and dying) parents. Alison does not preach about to discuss dying with a parent, but vividly and eloquently describes what worked for her mother’s personal journey. Despite the overarching positive experience she describes, the final chapter highlights three things Alison would do differently if she had the chance to do it again.

A Grieving Widow Tries to Make Sense of Untimely Death 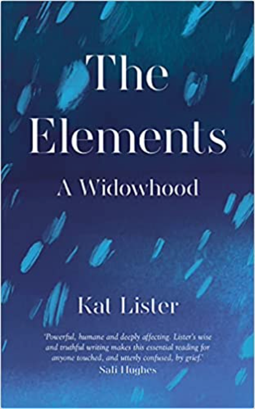 The Elements: A Widowhood

Close your eyes and picture a widow. What do you see? It is unlikely you pictured the image of author and journalist Kat Lister, widowed at age 35. In her grief, she finds comfort in literature, and tries to make sense of her story through the written accounts of others, both fictional and real. Is a wonderful mix of Lister’s personal story and her engagement with literature.

We learn about Lister’s husband and his cancer diagnosis. How for years Lister’s life revolved around being a caregiver, hospital appointments, seizures, uncertainty, and fear. She writes honestly about how did not anticipate that, after her husband’s death, she would need to unlearn the habits and routines of being a caregiver, and that it would be difficult. She writes of the challenges of trying to become pregnant when your husband is being treated for cancer, and the complicated pains of miscarrying in what is already an emotionally difficult time.

This book will appeal not just to young widows and widowers, but to many trying to make sense of their grief. I do have one small criticism about non-fiction memoirs generally: they often lack a bibliography. A comprehensive list of the books mentioned in this memoir would have been helpful so that book worms, like myself, could easily select future reads.

Death Is “Beyond Representation…Enigmatic and Internal” 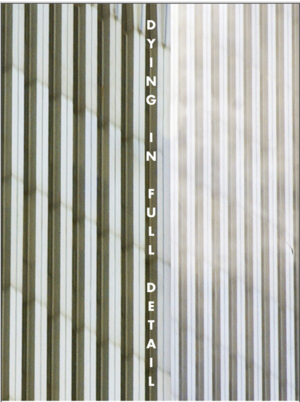 Dying in Full Detail: Mortality and Digital Documentary by Jennifer Malkowski, an assistant professor of film and media studies, provides great insight intohow death and dying are—and have been—portrayed on screen. The author notes that capturing the moment of death in a documentary was virtually impossible in the past and remains so even today, despite cheaper and often unlimited capacity of filming.

“It remains beyond representation… death is enigmatic and internal, with limited external signs… It refuses to appear as a transcendent, identifiable instant capable of video capture… [it] obscured the more frightening reality that dying is a durational process.” —Jennifer Malkowski, Dying in Full Detail, p. 7

In the introduction, Malkowski quotes a person’s voice captured in a recording of the Twin Towers attack in 2001: “Don’t take pictures o’that. Whattsa matter with you?" In contrast, in 2022, there is a cultural expectation that when a bad event happens, it should be filmed. The author explores the ethical question of where natural dying should be captured on film and be the subject of documentaries. Building on Vivian Sobchack’s work that outlines five visual gazes that filmmakers encounter when filming death (the accidental gaze, the helpless gaze, the endangered gaze, the interventional gaze, the ethical stare), Malkowksi introduces “the expectant gaze.”

Fictional on-screen depictions of death have “taught” audiences what death and dying looks like, images renounced by videos of real deaths. She discusses the example of Eric Garner and the video capturing his death, where he utters the powerful words ‘I can’t breathe’—words that took a life of their own with the murder of George Floyd.

A still shot from Conquering Cancer, a movie by Moonshine Movies, Australia. Used with permission.

Conquering Cancer, a film directed by Mike Hill and presented by Sue Collins, has a clear message: cervical cancer can be prevented and entirely eliminated. There is a vaccine with the potential to rid the world of cervical cancer in just a couple of generations, but that goal is hampered by stigma and supply issues. Women and girls are often hesitant to attend screenings or to receive the vaccination. Furthermore, the screening and vaccine are not readily available in every part of the world.

While I appreciate the use of “conquering cancer” in the context of trying to eliminate a preventable disease, the film’s use of the phrase that patients “lost their battle” with cancer is more problematic. A survey by Macmillan Cancer Support found that many cancer patients considered the phrase inappropriate, as it implies that they could be “defeated” by cancer, which undermines them as individuals. (The same negative connotation was linked to other words describing cancer patients: fight, victim, defeated, and hero.) 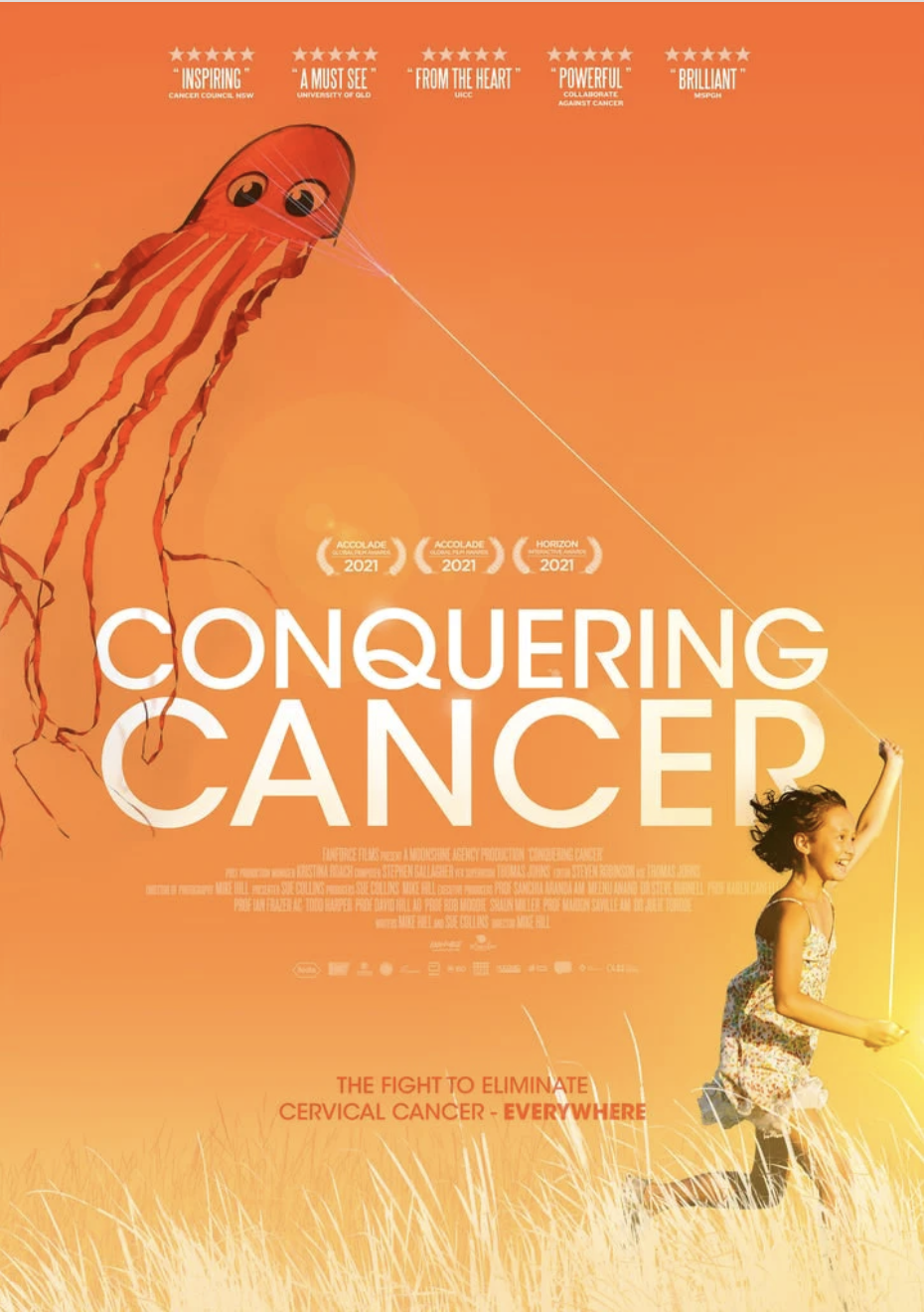 Due to its focus on treatment and prevention, palliative care for those with cervical cancer is not discussed in the film. It is a missed opportunity to shine a light on palliative and end-of-life care: as the film states, today’s reality is that a woman dies of cervical cancer every two minutes.

That being said, this documentary is an excellent educational resource, particularly for an audience of young people, as it highlights that cervical cancer is not an individual problem. The documentary convincingly shows how women globally are burdened with this disease. Hopefully, this will serve to counteract the stigma and reluctance to seek screening or accept a vaccine.

Conquering Cancer has won four industry awards: an honorable mention for the Humanitarian Award at the Accolade Competition; two awards of excellence at the Impact Docs Awards, and best documentary feature at IndieFEST.

NB: Review copies become the property of IAHPC and are not returned to the author. Only books related to palliative care that have been approved and have an ISBN will be reviewed. Due to the large number of requests, we cannot provide exact dates of when books will be reviewed.

Be the Seed of Change:
Support our mission to relieve health-related suffering in the world

1Your gift helps improve policies, knowledge, and evidence, and amplifying information that leads to better care of patients with palliative care needs.
2Every penny you give helps alleviate suffering: from teaching health care providers to global advocacy.
3Choose a unique gift to donate in honor of the people you love.

Ways that your gift supports the IAHPC mission

Give a gift, get a gift

IAHPC members: When you gift a 2-year membership to someone in a low- or middle-income country, we’ll extend your current membership by 6 months.

Through our educational initiatives we place practical knowledge in the hands of health care professionals and caregivers. We provide financial support to support participation in educational events. Your gift helps us continue developing courses and fund learning opportunities for palliative care workers as well as maintain and update resources to help palliative care tools for education.

Advocacy work for the inclusion of palliative care in health policies that lead to the improvement of quality of life of patients and caregivers. Your gift enables us to continue building and strengthening partnerships to accelerate global, regional, and national advocacy for palliative care.

We design and conduct studies that help us provide guidance and recommendations and take action based on the responses from the global palliative care community. Your gift enables us to continue doing research such as one we just completed to evaluate the impact of euthanasia and assisted dying practices on palliative care workers.

We disseminate information to raise public awareness and optimize the impact of our work. Our monthly newsletter and through our social media channels, we amplify the voices of providers and caregivers by sharing their stories. Our website registers almost 20,000 visitors per month, while Pallipedia – the online palliative care dictionary - registers 60,000 visitors per month. Your gift enables us to continue improving media campaigns to raise awareness and increase access to care for patients and families.

Make a donation for general funds

We are a small organization that allocates over 80% of its budget to mission driven programs and our free website. However, someone has to do the work – and we need funds to continue operating. (amount open)