(Editor’s note. A brief review of this book appeared in the December Newsletter, but we are pleased to present a more comprehensive review by Robert Twycross this month).

In 1971, I reviewed Elisabeth Kübler-Ross’s seminal book On death and dying, first published in 1969. In it she recounted numerous anecdotes about dying patients she had seen when a psychiatrist at a major hospital in Chicago. She had observed a common, though not fixed, pattern of adjustment by patients who were terminally ill. This became known as the Five Stages of Dying: Denial, Anger, Bargaining, Depression, and Acceptance. For me, as for many others, her insights had a major impact on my formation as a palliative care physician. The book was literally life-changing.

Now, nearly half a century later, Dying: a transition, written by a psychotherapist-cum-music therapist-cum-theologian-cum-spiritual caregiver, and head of psycho-oncology at St. Gallen Cantonal Hospital in Switzerland, could have an equally major impact on palliative care professionals. Whereas Kübler-Ross was a lone voice in a largely antagonistic environment, Renz has benefited by working alongside a palliative care team at a major hospital and has broader professional expertise. She is au fait with near-death experiences and archetypical-theological imagery. Thus, as a sensitive empathic listener, she is ideally placed to recognize and interpret the non-verbal, as well as verbal, behaviors of dying patients, and to use the methodology of participant observation to analyze and integrate her findings.

The result is truly ‘mind-opening’ and will revolutionize the understanding of palliative care professionals to the mostly hidden depths of the human psyche. Yes: palliative care aims to be holistic but, without in-depth psychological training, it will generally be impossible to move into the depths which Renz plumbs for us.

Patients referred to Renz are those in whom it seems likely that there are deep unresolved psycho-emotional and existential issues. And it is from this highly selective group of over 1,000 dying cancer patients over more than 15 years that she, with her colleagues, noted a pattern emerging – not inevitable but common enough to postulate a ‘transition’ model of dying.

For the average palliative care doctor or nurse, the value of Renz’s carefully collated and documented experience is to enable us to recognize better the common tendency to reductionist thinking and, in practice, working with a mainly physical focus with just a veneer of psychosocial-spiritual input tagged on. Her challenge is for palliative care generally to embrace and deliver more truly comprehensive in-depth holistic care. The book also reminds us of the need for specialist palliative services to include an experienced psychotherapist, both to assist with seemingly difficult-to-manage patients and to facilitate a much wider and deeper holism by all members of the team.

For example, almost certainly, absorbing the implications of Renz’s research will alter the way in which many professionals think about deep continuous sedation in dying patients. It is notable that the following comment appears in the notes after the main text:

“At St. Gallen Cantonal Hospital, patients experiencing multidimensional symptoms which are not controllable in a waking state, receive sedation for just one night in the first instance … Often temporary sedation, including phases when the patients are awake, is sufficient.”

No doubt the reason that non-continuous deep sedation is often sufficient is the added input by Renz and her psychologist colleagues.

A ‘taster’ of Renz’s collated data is available in Renz et al. Dying is a transition. American Journal of Hospice and Palliative Medicine 2013; 30: 283-290. The book was originally written in German and published in 2011. The translation is generally good but the text does not always read as smoothly as one would wish. However, the book is a goldmine of helpful anecdotes and insights – a ‘must-read’ for all those planning to specialize in palliative care. 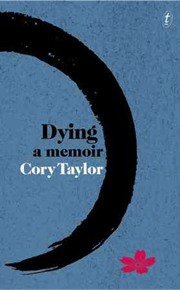 Cory Taylor is an Australian writer who has the great misfortune to have metastatic melanoma that is no longer responsive to therapy. This is her memoir, which I have to say is pretty clear-eyed and unsentimental.

Part of the book is a reflection on her personal and family life and her thoughts about the joys, the sorrows and the precariousness of life. The other is about what it means to be dying and her arguments for the right to choose the circumstances of her own death. Doctors and other health professionals get bad press for not talking about death and dying; religious beliefs (Christian, at least) are declared irrelevant; but her stash of (illegally imported) suicide medicine and the regular meetings of her local branch of Exit International, fare much better. The only thing stopping her, she says, is guilt about the selfishness of suicide and the collateral damage it may cause her family.

I was both provoked and disturbed reading this book. My objection to the legalization of assisted dying has nothing to do with religious beliefs, but I find the attitude of the new sectarians, who apparently know everything there is to know about human suffering and insist that anything to do with any religious belief be banned from the discussion, to be both inappropriate and intolerant. The problem with legalized assisted dying is that it implies that every doctor will make the perfect decision, every time.

But doctors are human.