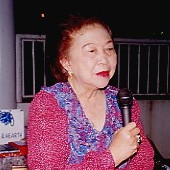 Josefina B Magno was born and raised in the Philippines. She completed her medical training at the University of Santo Tomas, the Philippines in 1943. Josefina married a physician who was her classmate in medical school and together they had 7 children. After only 11 years of marriage, her husband died of melanoma. The oldest child was 10 years old and the youngest was one year old, so she stopped practicing medicine to take care of her children and attend to the family business in the Philippines.

In 1958, the Philippine Government created the National Science Development Board and Josefina was asked to serve as Special Assistant to the Chairman of the new organization. This job eventually led to her being Assistant to the Secretary of Health of the Philippines, a position she held until martial law was declared by the dictator, Ferdinand Marcos. In 1969, Josefina left the Department of Health to go to the United States for a well-earned vacation. She and her daughter lived in Washington, D.C. for one year. It was during this time when she met the Chairman of Medicine of George Washington University Hospital who offered her a job as Community Medical Coordinator of the Rehabilitation Project of the University Hospital. During the course of her appointment, she was assigned to work in the Office of the Secretary of Health, Education and Welfare until 1972.

In July 1972, Josefina was diagnosed with breast cancer and during the radiation treatments which followed a radical mastectomy, she saw for the first time the anguish and the suffering that cancer patients and their families go through. She decided to be an Oncologist and when Georgetown University Medical Center in Washington, D.C. opened its Division of Medical Oncology, she became one of the first four Fellows to train in Georgetown. It was in the course of her training that she found the need for hospice care when cure of disease is no longer possible.

After attending some training courses on hospice care in England and Montreal, Josefina developed the Georgetown University Pilot Project on Hospice Care which consisted of six beds in a Nursing Home affiliated with Georgetown. One of the objectives of the project was to define the role of insurance providers in the delivery of hospice care. It was for this reason that the data that evolved out of the project became useful to the U.S. Congress when The Social Security Act was amended to have hospice care reimbursable by Medicare and Medicaid. Private insurers soon followed.

One of the biggest problems encountered in the early days of hospice care in the United States was the lack of interest of the medical profession. A task force identified the reason for this as the lack of understanding by physicians of the hospice concept of care. Josefina organized the International Hospice Institute in 1984 to provide training opportunities for physicians in the management of terminal illness. This was followed by the formation of the Academy of Hospice Physicians (AHP) in 1988 which evolved into the American Academy of Hospice and Palliative Medicine in 1993.

Josefina moved to the Philippines in 1995 to see how the hospice concept of care can be introduced into a country where the majority of people have limited resources, there is limited health coverage, and there is no government funding for hospice care. Working with the Philippine Department of Health and the Philippine Cancer Society, she has helped develop several models of how hospice care can be provided to as many patients as possible, regardless of their ability to pay. Among these models are a Community-based Hospice Home Care Program (Madre de Amor Foundation); a hospital-based Hospice Home Care Program (Makati Medical Center), a Lady of Pentecost Hospice Program). Many more models are being developed using the experience gained from these first programs.

Josefina was the First Executive Director of the National Hospice Organization of the United States (NHO) when the number of hospice programs in the US grew from less than a hundred to 1,200 programs in every state of the country within 3 years.

Josefina passed away in July 2003.