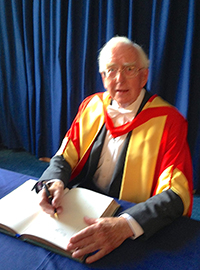 After qualifying in medicine at Edinburgh University in Scotland in 1955, Dr. Doyle went to South Africa where he worked for ten years as a missionary surgeon. Returning to Edinburgh, he spent the first ten years as an associate specialist/family physician and the next 20 planning, and then leading Scotland’s first comprehensive hospice/palliative care service. Inspired by St Christopher’s Hospice, established in 1967 by Cicely Saunders, in 1977 Dr. Doyle started St Columba’s Hospice, which continues to provides palliative care services both on site and in the community.

He was the founder and first chairman of the Association for Palliative Medicine of Great Britain and Ireland. Dr Doyle’s immense contribution to the field of hospice and palliative medicine has been recognized throughout the world. Some of the many institutions that honored his work are the National Hospice Organization in the USA, McGill University in Canada, The Hong Kong Society for Palliative Care, Chosun University in South Korea, Toronto University in Canada, The Korean Society for Hospice and Palliative Care, and the Hershey Medical Centre.

In 1987 he received the Order of the British Empire and in 2005 the American Academy of Hospice and Palliative Medicine’s (AAHPM) Lifetime Achievement Award. In 2013 he received a special award from the European Association for Palliative Care and in July 2014 the University of Glasgow awarded him the honorary degree of Doctor of Science.

Dr. Doyle was one of the founders of the IAHPC and served as Chairman from 1998-2000, following the retirement of Dr. Josefina Magno. In 2009 he was elected, along with Doctors William Farr and Roger Woodruff, as IAHPC Lifetime Board Member in recognition of his service and dedication to the organization.

His contribution to the IAHPC was immense. Together with Dr. Roger Woodruff, he co-authored three editions of the IAHPC Manual of Palliative Care. He also authored the very popular resource Guidelines and Suggestions for those Starting a Hospice/Palliative Care Service, updated by Tania Pastrana and Liliana De Lima in 2021. In addition, he co-chaired the committee on Essential Medicines for Palliative Care, which led to the publication of the IAHPC List of Essential Medicines. This List served as the foundation for the list subsequently submitted to the WHO for the section in the WHO Model List on medicines for pain and palliative care.

Dr. Doyle passed away peacefully on January 2022 in a palliative care unit surrounded by family members. As per his own words, he was proud of all the IAHPC was able to achieve during his lifetime dedication and work to the organization.