My October advocacy highlight was to participate in a panel at the London School of Economics on the U.S. overdose crisis. I discussed the fact that there are actually three concurrent opioid crises.

I participated as an a IAHPC delegate in the Inter-sessional Meeting of the Commission on Narcotic Drugs (CND) from October 16 to 18 at the United Nations in Vienna. The meeting was organized by theme; the last day was devoted to synthetic opioids and the nonmedical use of prescription drugs. These pose increasing risks to public health and safety, and raise scientific, legal, and regulatory challenges, including the scheduling of substances.

As a panelist representing IAHPC and the Vienna NGO Committee (VNGOC) on Drugs, I distinguished between the two opioid crises that concern the work of the CND: lack of access to opioids for the treatment of severe pain and suffering in more than 65% of the world, and the overdose crisis in North America. The VNGOC serves as the institutional link between nongovernmental organizations and the UN agencies involved in drug policy, such as the Commission on Narcotic Drugs (CND), United Nations Office for Drugs and Crime (UNODC), and International Drug Control Board (INCB). It supports exchanges between NGOs, UN agencies, and Member States. [Read the text of Heloisa’s presentation, and see the accompanying slides.]

The IAHPC presentation also highlighted the lack of funding to enact the second pillar of UNODC’s “comprehensive” five-pillar Opioid Strategy. The second pillar ostensibly promotes rational prescribing and improved access to opioids for medical and scientific use, and promotes interagency cooperation in addressing the nonmedical use of opioids. So far, there is no funding from Member States, and IAHPC is offering to provide technical consultation as a United Nations Economic and Social Council (ECOSOC)-registered NGO.

A view from Russia

After my presentation, delegates from Russia and Belgium commented on the situation. The Russian delegate said that palliative care is a key priority in that country; in March, President Vladimir Putin signed a law on the use of medicines for palliative care. The delegate added that citizen inpatients and outpatients are guaranteed palliative care and access to analgesics, and that since Russia is receiving help from civil society organizations, the problem is solved. He reminded the audience that CND passed a resolution on improving access just this year, and expressed hope that the topic would continue to be a global priority.

The Belgium delegation affirmed that Belgium continues to support the discussion on access to opioids for medical use, and the importance of highlighting the difference between nonmedical use and pain treatment. The speaker stated that UNODC, World Health Organization and INCB have produced good results, and that the Belgium delegation is optimistic about future progress. He also said that Member States from the CND and the UN have made relevant commitments, that the issue has “political urgency,” and can be tackled by allocating sufficient resources.

Asma Fakri, Coordinator of the UNODC Opioid Strategy, contacted me after my presentation and said that her team is planning to work more intensively on the rational use of opioids. She referenced IAHPC’s presentation during her statement in the afternoon, and affirmed her willingness to collaborate.

Other presentations that touched on access to opioids for pain treatment were made by: Elizabeth Mattfeld from UNODC, Stefano Berterame from INCB, Lauren Deluca from Chronic Illness Advocacy & Awareness Group, and Christian Herrera from the Organization for Economic Cooperation and Development (OECD).

Tramadol use
in the spotlight

During this thematic session on opioids, there was general interest in debating issues such as nonmedical use and treatment of opioid dependence disorder, as well as the possibility of placing tramadol in one of the schedules of the international drug control conventions. Talk of police seizures of illicit substances and measures to curb trafficking, rather than discussing access for medical use, dominated. Fortunately, the United States delegation raised the question of availability of tramadol for medical use, in light of the pressure for scheduling coming from North African countries. The West African Drug Policy Network, an NGO represented by Chramid Kpadonou, presented on the negative impact that international tramadol scheduling would have on access for medical use in African countries, where tramadol is often the only medicine available for the relief of moderate to severe pain.

See here for all presentations.

Stay tuned for next month’s report and please share widely! 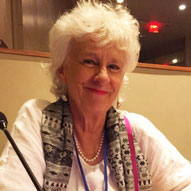 Do you have any comments or questions about this piece or our advocacy program?