This space is usually dedicated to a feature written by a member of the IAHPC Board of Directors. In this issue, we publish the story submitted by a nurse in Sudan. 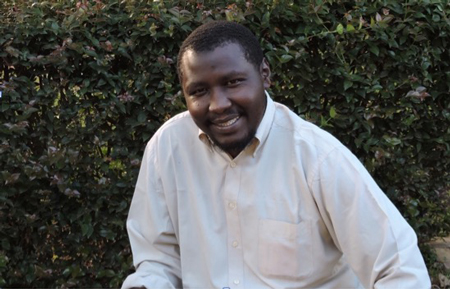 In 2009, I had no idea what palliative care was. Despite this, I was the first to volunteer when Dr. Hind Agabani, an anesthesiologist in the intensive care unit where I was working, announced that she was looking for nurses interested in palliative care.

I just knew that it was new to me — and I wanted to be the first!

My first step was to be introduced to Esther Walker, a helpful and dedicated volunteer nurse from the British Embassy in charge of training the nurses who, like me, had signed up to learn about palliative care. She came every week to do the training; I offered to help her arrange all the lectures and participants.

A candle to light the darkness

After each day of training in the classroom, we visited patients on the general wards to assess their palliative care needs. One day while visiting the gastrointestinal surgery ward, we met with a very enthusiastic surgeon. I introduced him to Esther, and he immediately launched into a summary of the six patients in the ward. After he had finished, we knew that every single one of the patients was in need of palliative care.

Esther helped me a lot; she gave me a candle to light the darkness for people who need palliative care. In October of 2009, she arranged for me and Dr. Nahla Gafer to attend the second international students’ training by Hospice Africa Uganda: an introduction to palliative care.

Persuasion and persistence pay off 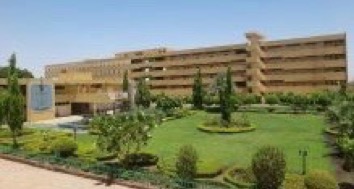 After I returned from Uganda, I started following up on palliative care patients in the hospital part-time. However, in 2011, after persistent persuasion and impassioned advocacy to both the head nurse and the manager of SUH (and with the support of Dr. Nahla and Ms. Walker), I was freed from my ICU duties so that I could concentrate full-time on palliative care for the increasing numbers of patients who require it.

Dr. Nahla and Ms. Walker attended major rounds when we returned from Uganda. Now, Dr. Nahla, myself and other colleagues have instituted a continuous training program in basic palliative care. Visiting experts have added to our knowledge, including a team from MD Anderson Cancer Center, Texas, USA, and pediatric palliative caregivers from South Africa. In 2014, I went to Kuwait for Training of Trainers and, finally, received a diploma in palliative care from Makerere University, Kampala, Uganda, in 2016, thanks to funding by the Sudanese American Medical Association. I have also received training in stroke care and now I am a member of the hospital’s stroke unit, as well as the link for a UK stroke team who visit us annually. I assist with stroke patients in need of palliative care, including home visits.

A challenge and a new nickname

We still have no palliative care doctor at SUH, a common problem in the early days of palliative care units, so we lack the ability to prescribe narcotics to ease pain. Yet I have trained many nurses and a dietician in pain relief. Over the last six months, I developed an education program and trained 23 health care professionals in palliative care.

Due to my lobbying for the use of morphine, I have a new nickname: Alfaki Morphine. In my community, Alfaki is also known as the person who treats patients by the holy Quran. 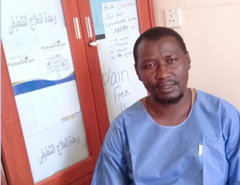 Alfaki Suliman on the job.

One day, a doctor at the hospital broke down in tears when a 35-year-old man was diagnosed with colonic tumors so advanced they were inoperable. The surgical team felt unable to cope with delivering the news. The man had not yet seen his baby boy, who had been born while he was in hospital.

I took responsibility for breaking the news, and discharged him so that he could travel home. Both he and his family thanked me for the support and for answering all of their questions. Since then, the hospital’s surgeons have left both the delivering of bad news, and the subsequent counseling — even delivering news of referrals to oncology — to me. They also rely on me to counsel patients in pain management.

When I worked strictly as a nurse in intensive care, I didn’t know how to deal with many events, including ‘Do not resuscitate’ orders that were unacceptable to me at the time. (I remember one patient with brain-stem death connected to a mechanical ventilator, and the difficult decision as to whether or not to disconnect the ventilator.)

Today, I am not opposed to DNR, or switching off a ventilator, but I am opposed to decisions that come so late a family has spent all of their money trying to avert the inevitable, with futile treatments and unsuccessful interventions. Palliative care training has changed my opinion of the best way to break bad news, and how to concentrate on the quality of a person’s life.