This month, we present a summary of an article published in ehospice by Dr. Katherine Pettus, IAHPC Advocacy Officer. 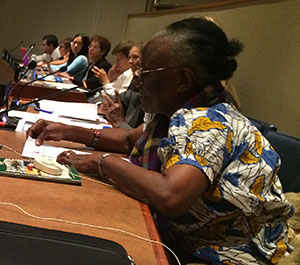 This meeting focused on the need for a binding legal instrument, an international convention, similar to the conventions that protect the rights of women, children, and people with disabilities.

"Individuals have rights beyond their citizenship of one state or another: they have human rights."

Without the explicit international legal protection conferred by a convention, older persons remain extremely vulnerable to poverty, abuse, neglect, illness, and premature mortality, among other things.

In 2010, the UN General Assembly mandated the OEWG to study protection gaps in the rights of older persons. Although every country and region is different, older persons, and particularly older women, are one of the most universally vulnerable populations on the planet.

The countries in Latin America have taken a huge step by adopting the Inter-American Convention on the Rights of Older Persons approved by the Organization of American States on June 15.

Sadly, the Draft Protocol to the African Charter on Human and Peoples’ Rights on the Rights of Older Persons in Africa has dropped its clause regarding a right to palliative care, owing to some drafters’ fear that palliative care could be confused with euthanasia. The palliative care and human rights communities in Africa are working with AU member states to clarify that misconception and to ensure that palliative care language is included in the final draft, slated for ratification in early 2016.

To read Katherine’s full article in ehospice, and for more information on global civil society organizations’ activities to protect the rights of older persons, click here.