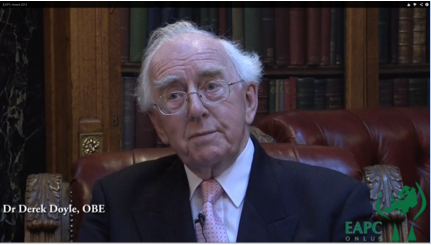 Recently Dr Derek Doyle was honored as the recipient of the EAPC Award for 2013. This prestigious award recognizes his long and dedicated leadership in the field of palliative medicine in Europe. The board of directors and administration of IAHPC wish to extend our hearty congratulations to our dear friend, colleague and fellow board member on receiving this recognition. We have been blessed on this side of the “pond” to claim him as one of our own during his long, dedicated and faithful service to our association dating back many more years than any of us wish to admit.

So, why did the EAPC give Derek this award? Hold your breath for this is going to be a breathtaking journey into the life of a true hospice/palliative care pioneer. In addition to having been at the forefront and in leadership positions during the founding of many palliative care organizations in Europe, I also suspect that the EAPC committee chose Derek because of his untiring dedication to teaching while empowering us to apply our knowledge as we sit at the bedside of patients who desperately need our type of care and love. He has provided us with clinical pearls to care for our fellow travelers in a simple, trustworthy and compassionate manner. He was able to skillfully bridge the gap between science and caring with a remarkable human touch.

Finally, I must mention just a couple of Derek's contributions to North America. This is not to detract from the significance of the European recognition but to let everyone know how thankful we are for his contributions here on our behalf:

On a personal note during the past 17 years as editor of this newsletter, I asked Derek enumerable times to contribute articles. Not only did he accept the assignments, but he did it graciously and wrote with his usual clarity while always exceeding my grandest expectation. By the way, he always had his articles to me in advance of the deadlines.

Thank you Derek and congratulations.

To view a video of Dr Doyle's reflections on receiving this award see here. 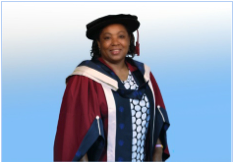 All who had the pleasure of meeting or working with Geoff Hanks will understandably have different memories and descriptions of him. What no-one will deny is that he was a giant – intellectually, clinically, as a researcher, as a teacher, as a committee man, as an editor, as a pioneer in palliative medicine.

Already qualified as a physician and clinical pharmacologist he went to Oxford to train under Robert Twycross before being appointed Consultant in Palliative Care in The Royal Marsden Hospital (London and Sutton). When the first Chair of Palliative Medicine was created in St Thomas's and Guys Hospital, London he was the obvious man for the job. After seeing his team settled, he then moved to Bristol to be Professor of Palliative Medicine and remained there until his relatively recent retirement.

He served on the Board of the Cancer Relief Macmillan Fund in the UK, on the Board of IAHPC (2008-2010), and on the Board of the EAPC finally serving as a distinguished President. He will also be remembered with affection and deep gratitude as the Editor-in-Chief of the journal Palliative Medicine, now recognised as one of the finest specialist medical journals in the world, largely thanks to him.

With MacDonald and Doyle he was a Co- Editor of the Oxford Textbook of Palliative Medicine and sat on umpteen editorial boards. All this whilst serving as a senior clinician, a medical professor and a supervisor of PhD students, and playing his full role in the University of Bristol.

Always gentle and gracious, far more ready to listen than to talk, a delightful host, a riveting lecturer, an oenologist and one of the best friends many of us have ever had. Palliative Medicine has lost one of its giants but we, who are left, will always be able to say we knew, and learnt from, one of the finest doctors and colleagues at work in this young specialty to which he gave so much.

The staff, board of IAHPC and members extend their most sincere condolences to Geoff's wife, family and friends!