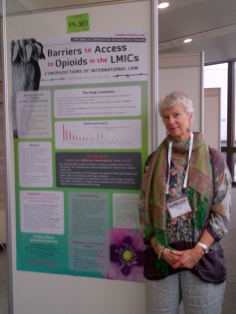 This month we present the transcript of Dr. Pettus’ remarks during the meeting on September 24, hosted by the Finland Mission for NGO interaction with the Commission on Narcotic Drugs (CND) missions in Vienna. This preceded the first intercessional meeting on Demand Reduction and the 2014 High Level Review of the 2009 Political Declaration on the world drug problem.

These remarks were prepared with the assistance of Mr. Diederick Lohmann of Human Rights Watch.

Dr. Pettus participated in this meeting as a representative of IAHPC.

I am making this intervention to impress on you the urgency of a rigorous engagement on access to medications for the relief of pain and suffering during the 2014 review and the 2016 high level meeting.

As you probably know, there is a reference to pain relief in the Draft Ministerial Statement in Paragraph 45, which reads:

“Highlight the need to improve our efforts to ensure the relief of pain and suffering and the availability of medication-assisted therapy.”

We welcome this paragraph but do not think on its own it adequately reflects the increasing prominence of this issue in global discussions on health and drug control.

As you may recall, the issue of access to controlled medications for relief of pain and suffering was first included in the Global Drug Strategy in 2009. This was an important step for patients with chronic or incurable illnesses and their families all over the world.

Since that time, the issue of access to controlled medicines has gained increasing salience with UN agencies, and in international reports and declarations. In 2009 and 2010, the Commission on Narcotic Drugs (CND) adopted resolutions urging countries and the UN to take steps to improve access to such medicines; in 2011, the International Narcotics Control Board (INCB) published a supplement on the topic, in 2011 the United Nations Office on Drugs and Crime (UNODC) prepared a Conference Report on Availability; the 2012 UN General Assembly (UNGA) Political Declaration on the Prevention and Control of Non-communicable Diseases; the World Health Organization (WHO) Global Action Plan on Non-communicable Diseases contains specific recommendations on availability of these medicines; and the African Union recently adopted a Common Position on Controlled Substances and Access to Pain Management Drugs that strongly calls for action to ensure controlled medicines are available to those who need them.

The reason that this topic has become a key issue in global health and drug policy is simple. Tens of millions of people suffer each year from treatable pain because inexpensive and safe medications are unavailable to them.

I would like cite some WHO statistics that show the extent of the problem. I apologize in advance for reducing an individual person’s and their family’s suffering to aggregate numbers, because each of these mind-numbing statistics represents the pain of a human being: someone’s child, mother, son, or husband, or possibly oneself.…

The WHO estimates that 5.5 billion people (83% of the world’s population) live in countries with low to non-existent access to controlled medicines and have inadequate access to treatment for moderate to severe pain. The INCB estimated in its 2010 Supplement that 100 countries have “very inadequate” opioid consumption, and another 20 inadequate consumption. In these countries, according to WHO, each year tens of millions of patients suffer without adequate treatment: these include:

We believe with this growing consensus that access to controlled medicines for pain needs to translate into a more prominent place in the midterm review in 2014 and during the High Level meeting in 2016.

It is time to start aligning the drug policy discussion with the 2011 Political Declaration of the UNGA on Non-communicable Diseases, which calls for member states to promote access to medicines for palliative care. The main essential medicine on the WHO list, considered the gold standard of pain control is, of course, oral morphine.

The realization of the Millennium Development Goal (MDG) 8e,"Provide access to affordable essential drugs in developing countries", is likely to be further away for opioid analgesics than for any other class of medicines.

As documented by the INCB, unnecessarily restrictive drug control regulations and unfounded fears around opioid medications remain among the main impediments to access to these medicines.

The Single Convention requires countries to ensure the adequate availability of controlled substances for medical and scientific purposes while at the same time preventing illicit manufacturing and trafficking. It sets up a framework to ensure an adequate supply of controlled medications. Clearly the framework has not worked, as the WHO statistics I just cited show.

The traditional focus of the drug policy debate on supply reduction and demand reduction ignores the needs to increase licit supply, and increase licit demand to meet the real need to control pain.

The European Society of Medical Oncologists (ESMO) last year cited “a global pandemic of untreated pain.” Since the central aim of the Single Convention is to promote the “health and welfare of mankind” the CND needs to prominently attend to this issue during the mid-term review of the global drug strategy and in the lead up to 2016 in order to align with the MDGs and UNGA Political Declaration.

This issue of access to pain medicine is now well and truly on the global policy radar. We know how to fix the problem; it’s low tech, it isn’t expensive. What this issue needs is strong global political commitment to solving it. The mid-term review and the 2016 high level meeting are opportunities that should not be missed.

Thank you for your attention.

For more information and education materials on this issue, please contact me.

This section is written by Katherine Pettus, PhD, a lifetime member of IAHPC. Dr Pettus is a scholar of international law and drug policy committed to promoting access to palliative care and human rights, and serves as the IAHPC representative to several drug control policy meetings and discussions. She is a teacher of American Politics and International Relations at the University of Pécs, in Hungary. This section highlights her participation in several international meetings and conferences related to drug policy and her proposal for collaborative advocacy strategies to ensure that all patients have access to care they need.