Reflections from IAHPC Board Members

Practitioners of modern medicine think disease is a result of a natural phenomenon. It advocates medical treatments based on science and the use of sophisticated technology. These could be in conflict with culture-specific health beliefs about what causes illness, how it can be cured, or treated, and who should be involved in the process.

In India with a population of 1.21 billion, there is an astounding diversity in terms of physical, religious, linguistic and racial characteristics. Religion, culture and caste still play a central role in the life of its people.

A significant feature of the Indian health system is the coexistence of multiple health traditions. There are organized systems in medicine such as Ayurveda, Siddha, and Unani or folk traditions (called Lok Parampara) consisting of traditions passed on by word of mouth in villages for generations. They exist in astrology and religious practices. Patients may attribute an illness to supernatural factors which causes fears that are often not vocalized but may cause a great deal of distress. Some common misconceptions are that cancer is contagious and that such an illness is a sign of bad luck, or ill fate, or it is the result of witchcraft, or just “bad” vibes.

These diverse cultural practices, and values, affect patients’ attitudes about medical care and their ability to understand, manage, cope with illness, and deal with death, dying, bereavement and decision-making.

The following are some of the common practices related to food and personal care rituals that influence health care delivery:

Food is revered in Indian society and many complex traditions have developed around food preparation and consumption. There is an accepted practice of avoiding, or including, some foods during illness called "apathyam and pathyam" (in Sanskrit). Most patients will diligently follow these traditions (whether discussed with the health-care professional or not). The foods that are supposed to be “hot” are avoided. Foods like pulses (an annual leguminous crop) are particularly avoided especially after a surgery because of the belief that they cause the development of "pus” at surgical sites or wounds. These guidelines regarding food cut across all walks of life and strata of society regardless of caste and literacy, though their nature may vary from region to region.

Religion assumes a vital role during illness. People from most Indian religions are used to bathing everyday almost as part of their religious practices. The Indian concept of cleanliness is not satisfied by wiping or soaking but has to be by bathing or washing in running water. This becomes a problem for patients undergoing radiotherapy or who are bed-bound. Colostomies and urinary catheters are difficult for patients, or relatives, to accept because they feel unclean and "unfit" to pray to God or to face society.

Cultural competence may be defined as the ability to “perform and obtain positive clinical outcomes in cross-cultural encounters.” Respecting and being sensitive to people from diverse cultural and linguistic backgrounds is integral to the delivery of quality care. All health professionals must have a level of cultural competence when caring for people from different cultural backgrounds. Hence, it is imperative that in a country like India, cultural competency is prioritized in medical and nursing education and health care.

Involvement of intermediaries such as lay health workers (LHW), promoters and volunteers should be encouraged. They typically live in the community in which they work and are effective because they use their cultural knowledge and social networks to effect change. There is good evidence that they are effective because they are culturally appropriate and integrated into communities.

Times of suffering from serious illness like cancer tend to make people lean towards their culture and belief systems.

Dr Gayatri Palat is a board member of the IAHPC and the Program Director for PAX India of the International Network for Cancer Treatment and Research (INCTR). Her biography may be found here. 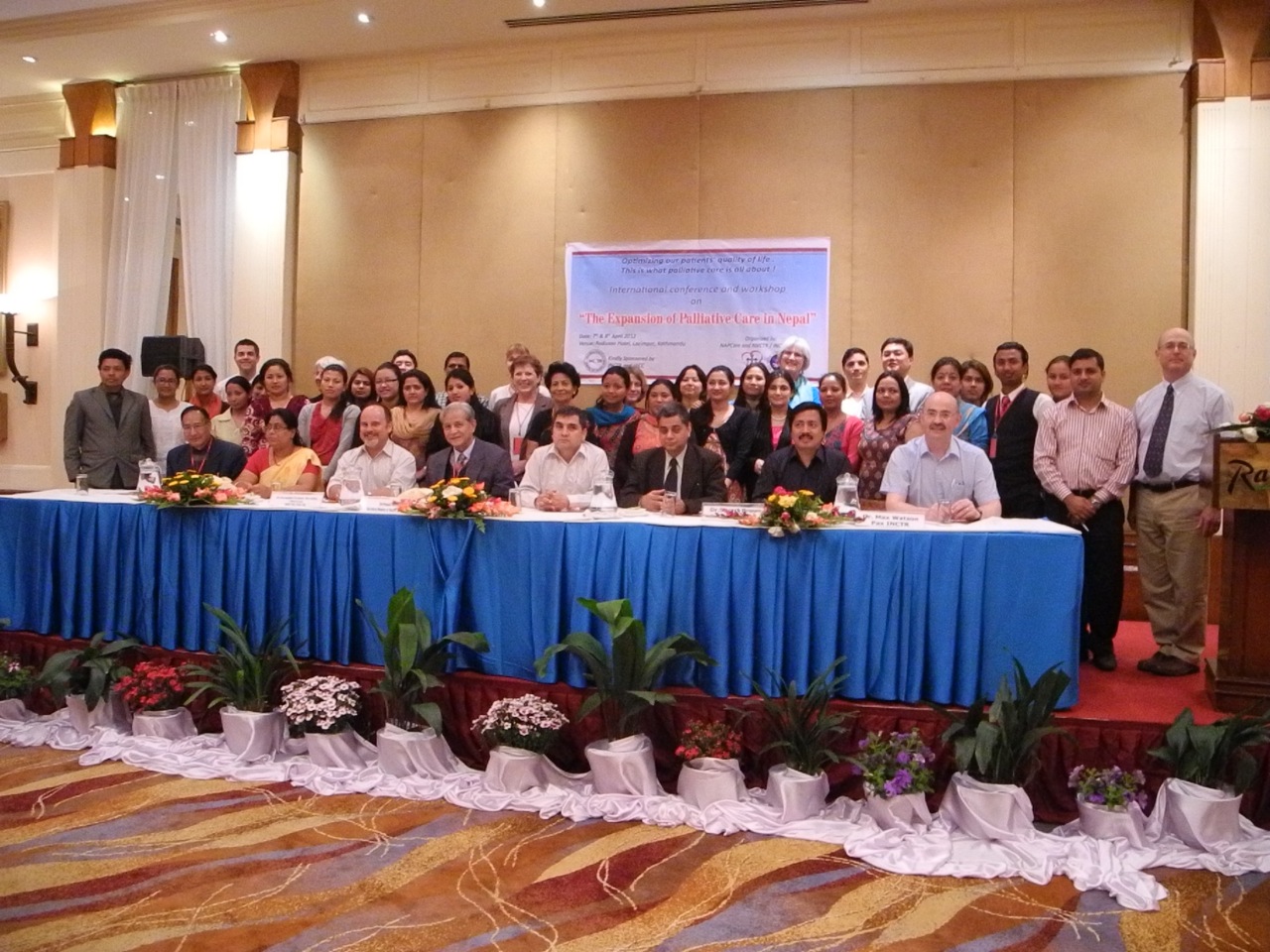 During the past 15 years, palliative care has been introduced at a number of centers in Nepal. Health professionals who have received specialized training have treated many thousands of patients. A number of organizations, including the International Network for Cancer Treatment and Research (INCTR), its partner organizations, and the Princess Alice Hospice from the UK, have been involved in supporting the early stages of the development of palliative care in Nepal. There are also other active hospices that have teamed with international groups. For example, the Shechen Hospice was developed in collaboration with a group from Rouen, France, and a Korean group has supported Seemul Hospice in Thankot. However, the majority of patients in Nepal who would benefit from palliative care are still not receiving it.

With this in mind, a workshop was held in Kathmandu 7-8 April 2012 entitled “Expanding Palliative Care in Nepal”. It was hosted by the Nepal Association of Palliative Care (NAPCare) and Nepal Network for Cancer Treatment and Research (NNCTR), and sponsored by the International Union for Cancer Control (UICC), INCTR and TWO WORLDS Cancer Collaboration (Canada). Representatives from all over Nepal participated during two days of formal and informal discussions along with an international faculty.

Present at the meeting, as part of the international faculty, were two IAHPC Board Members – Dr. Gayatri Palat (India) and Dr. Fraser Black (Canada) both with the International Network for Cancer and Treatment.

The meeting was quite interactive and utilized a ‘World Café/Knowledge Café’ format which had also been used during an INCTR sponsored workshop in Rio in November 2010 entitled ‘Simposio de Expanso dos Cuidados Paliativos no Brasil’ which had close to 100 participants from all 5 regions of Brazil. This format allows for the sharing of collective knowledge, ideas and insights and often results in a deeper understanding of the issues involved and possible ways forward.

The highlights of the meeting were as follows:

Attendees enthusiastically agreed to continue working together to further improve existing services and develop more urban and rural community-based programs throughout Nepal in order to help support the many adults and children for whom palliative care is currently unavailable but desperately needed.

Dr. Fraser Black is a board member of the IAHPC and the Medical Director of the Victoria Hospice in Canada. Dr. Black’s biography may be found here.