We were invited to join a medical team to visit Boroma Hospital in Somaliland, where the team consisted of a plastic surgeon (father), general surgeon (son), palliative care teacher (mother) and a Kenyan anesthesia nurse.

Teams go from Kijabe Mission Hospital, Kenya, every three months to provide surgical care and to teach interns and students from the Ahmoud University. This university is supported totally by the Diaspora citizens who have migrated to other countries, but remain committed to helping Somaliland.

I was asked by the university to teach two, two-day, seminars and to be available for patient consultations.

Travelling from Kenya to Boroma is challenging! First, we flew into Berbera, on the Gulf of Aden. From there, we began a long road journey in 40 degree Celsius heat through the desert to Hargeisa, the capital, and then on to Boroma. There had been recent torrential rainfall in the area, so the road was a 4 wheel driver's joy. In some places, there was no road at all, only a track full of pot holes, rivers to ford and camels, goats, hyenas watching from the sidelines– but we arrived safely -- 13 hours after leaving Nairobi.

I was greeted very warmly and informed that at 8:30 a.m. the next morning "The students will be waiting” and they were! I had left a Palliative Care Toolkit in 2009 during a previous visit, and this had been photocopied for each student with the instructions to study it before the seminar started.

As part of the seminar, students were asked to share together the problems families faced as they cared for terminally patients according to Muslim traditions and culture.

We looked at the WHO Essential list of medicines for palliative care and then the students were asked to report back about availability, cost, and provision of medication for patients after visiting local pharmacies and the hospital. Specifically they were to investigate the morphine and analgesic drug situation.

Morphine ampoules can be supplied by town pharmacies, without any observable controls or restrictions! All drugs must be purchased by the family, and kept in a locker by the bedside. Analgesic drugs are in very short supply and there is no oral morphine available.

The students were able to visit three patients, who had come to the hospital seeking help. All had symptomatic problems and severe pain for which there were no drugs available. They were to be sent home, and the family knew the illness could not be cured. It was very hard to send them home under these circumstances! The students sat on the floor of the ward, where the patients had chosen to lie, talked with them and their families, communicated gentle truth, listened to their questions, and answered as they could. This appeared to bring some comfort, even though there was no promise to relieve suffering.

The toolkit was helpful and together at the end of each seminar, we considered needs of the community in Somaliland. Through this process we hope that the suffering of the terminally ill can be lessened in the future.

During breakfast on our last day in Boroma, a well dressed man with hovering security guards, came and greeted me, wanting to know why we were in Boroma. He was a Minister of the President's party and as we talked I was able to give a lecture on palliative care including a challenge to the government of the importance of importing oral morphine and supporting the educational efforts that must accompany it!

I am now corresponding with him, and he has agreed that the people of Somaliland deserve better care and need to be able to have analgesics to relieve their pain, just as in other countries. This is a work in progress and it may be the most important result of this visit to Somaliland. 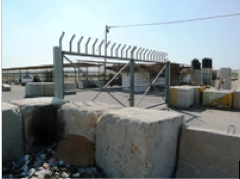 In many ways the Gaza strip is similar to Somaliland.

My husband and I have been coming to Gaza for medical relief work for the past decade and working at the Ahli Arab hospital in Gaza City. He is a plastic surgeon, so there are always many patients seeking help. We have been able to conduct seminars "An Introduction to Palliative Care" for Health care professionals throughout Gaza, including the deans of medical and nursing faculties in the universities here.

It has proved very hard for the medical staff to accept the principles and practices of palliative care, with the associated challenges, to care for the terminally ill patients in a way that differs from usual. At last, this is changing.
In May 2012, a pain management seminar was held at the Ahli Hospital facilitated by the hospital and organized by doctors, for doctors. After the seminar, three doctors offered to give leadership to the development of palliative care.

Gazans are allowed to attend post graduate seminars and conferences in other countries.
Two doctors will attend the 1st international conference in Amman, Jordan, in early November and Dr Bushnaq from Jordan Palliative Care has offered to come to Gaza for a 3 day visit in late November.

There is a small committee considering how best to develop palliative care within the Gazan health system. All have agreed that the first action should be to ensure that the drugs necessary for use in palliative care are available.

I was able to meet with the newly appointed Minister of Health and discussed with him the problems facing oncologists and those caring for patients who are terminally ill including those with cancer.

Only 50% of basic chemotherapeutic drugs are available and there is no radio therapy which means that patients are referred for further management to institutions outside of Gaza.

Oral morphine is not available and only occasionally ampoules can be supplied to hospitals. Codeine and fentanyl patches are also not available -- very little is available for the management of pain.

In the past, the ministry has had regulations which prohibited the importation of drugs of addiction. While talking with the minister, I suggested that the word 'addicted' should be deleted! He agreed to substitute 'controlled drugs’.

He has promised to work towards changing these regulations as soon as possible and to ensure that the necessary drugs for the treatment of cancer patients are made available. This decision is welcomed by all of us involved in trying to introduce palliative care into Gaza.

There is a new volunteer organization in Gaza city, The Smile of Hope, that aims to train 40 volunteers before the end of the year to offer social and emotional support for those with cancer. This will help in the provision of palliative care in the future.

All this has taken time. With the unique problems facing health care and the planning for the future in Gaza, it will be difficult and slow for palliative care, but it is now in good hands.

In a country where peace is the hope, palliative care can be an important bridge between countries that have affluent health care services and poorer countries where the terminally ill continue to face their last days with pain and suffering.

The IAHPC Travelling Fellowship scheme which made my visits possible is an important start to change these situations. I am personally, very thankful.