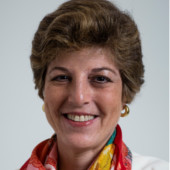 A native of Rio de Janeiro, Brazil, Claudia Burlá is a licensed Geriatrician with certification in Palliative Medicine and a PhD in Bioethics (University of Porto, Portugal). She was elected full member of the Rio de Janeiro Academy of Medicine in 2010.

She is an active member of the Brazilian Society of Geriatrics and Gerontology (member since 1983), was its Secretary-General between 2002 and 2004 and, in 2004, was among the founders of BSGG’s Standing Committee of Palliative Care, chairing it until 2008; currently, she is a member of the Committee’s Advisory Board. She has also been a member of scientific committees for a number of Brazilian Congresses of Geriatrics and Gerontology. Claudia also sat on the Board of the International Association of Gerontology and Geriatrics - IAGG as Vice-President / Secretary General (2005 – 2009). In addition, she is a founding member of the Brazilian National Academy of Palliative Care – ANCP (2005) and was a member of its Advisory Board until 2016.

Claudia joined the staff of the Marcílio Dias Navy Hospital (Rio de Janeiro, Brazil) in 1985, where she worked until 2002, in charge of implementing the Clinics of Geriatrics, with focus on very old patients with dementia and at the end of life. From 1998 until 2000, she also worked at the Palliative Care Unit of the National Cancer Institute – Brazil (INCA), developing protocols for care delivery and supervising the multiprofessional team; she led the organization team for INCA’s First Meeting on Palliative Care and Pain, 1999.

Claudia’s international experience includes a training period at the Geriatrics, Geriatric Psychiatry (under the mentorship of Kenneth Shulman), and Palliative Care (under the mentorship of Larry Librach) Clinics at Sunnybrook Medical Science Centre, University of Toronto, Canada (1997 and 2002). She was an international reviewer of the Guide to the End-of-Life Care for Seniors, joint publication of the University of Toronto, University of Ottawa and Health Canada (2000). In 2007, spent one month at the World Health Organization headquarters in Geneva to develop a document on end-of-life care for older individuals, published in 2009.

Claudia is a guest professor and lecturer on Geriatric Palliative Care in medical schools and continuing education courses throughout Brazil, and in congresses and meetings organized by other medical specialties. She is also a guest speaker at the Escola da Magistratura (“Judgeship Training School”) on Geriatrics and Palliative Care for active judges.

In the little spare time she has, Claudia likes to read, go to concerts and spend time with her lovely husband, André.